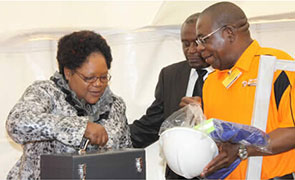 commissioned Vaka Concrete Limited US$4 million world-class brick and pavers making plant. Vaka Concrete is a manufacturer of concrete build products including stock bricks, domestic and industrial interlocking pavers and is located in Sunway City Industrial Park, seven kilometres east of Harare. The state-of-the-art brick-making plant has the capacity to produce 110,000 bricks per nine hour shift making use of its latest imported technology. Initially, the project will directly employ at least 50 people, with the number increasing to over 130 by 2014. The project will also benefit downstream industries such as construction, infrastructure and national housing as well as boost the operations of suppliers of cement, concrete and quarry, among others. Speaking at the official launch of the brick and paver manufacturing plant, Acting President Mujuru applauded Vaka Concrete for the initiative, saying it was encouraging to have indigenous Zimbabweans investing in their own country.

“This investment is 100 percent owned by indigenous Zimbabweans who have come together, taken risks and showed confidence in the future of their country.”  “This is a bold move, which I and the people of Zimbabwe must applaud. We are calling for more investment in value addition activities such as this brick-making plant in order to create jobs and build infrastructure for this country.” ~ The Herald 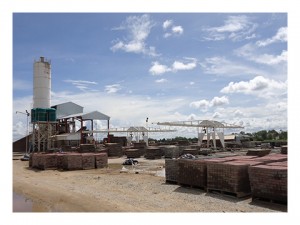 Vaka Concrete Harare brick manufacturing plant is ready to produce materials according to customer specifications. The plant is able to produce the desired colour for both the bricks and pavers to suit the project. Our strength lies in our high quality yet affordable products, abundant production capacity capable of supplying large scale construction projects and highly skilled, competent and dedicated technical and strategic leadership teams. The plant is highly automated and use the latest Eirich mixing technology which ensures consistent product quality. Our vision through this project is to make homes affordable.

Speaking at the official launch of the plant, Acting President Joice Mujuru paid tribute to Vaka Concrete for complementing the government’s efforts of providing housing for all by 2030.“In order for Zimbabwe to realise its dream of restoring the manufacturing as a key pillar for spurring economic growth, there is need to take note of a number of imperatives,” she said. “The natural resource endowment of Zimbabwe should provide a foundation for its industrialisation.”~  Newsday

Confederation of Zimbabwe Industries president Kumbirai Katsande said the investment showed how determined some Zimbabweans were to contribute to the growth of the economy and it comes at a time when other companies are closing operations which shows the potential Zimbabwe has in economic growth. ~ ZBC